Our colcannon recipe features kale and bacon folded into creamy mashed potatoes that are mixed with generous amounts of butter and milk! This traditional Irish dish is particularly satisfying when served alongside a big plate of corned beef and cabbage!

St. Patrick’s Day will be here in a few short weeks and, having lived in Boston, we couldn’t let the month pass without a few Irish-inspired recipes. While corned beef is definitely on the menu, it’s really only associated with the holiday in America, so we thought we’d start off with one of our favorite traditional Irish dishes: colcannon! Creamy mashed potatoes mixed with kale (or cabbage if you prefer) and dairy, this side is incredibly hearty and budget friendly.

To get started, peel and roughly chop the potatoes and then boil in salted water until they can be easily mashed. This usually takes about 20 minutes for me, which is just enough time to prepare the mix-ins (bacon, leeks and kale) so that they’re ready with the potatoes.

Begin by frying the bacon in a large skillet and then removing to a paper towel lined plate to absorb any excess oil. Then drain all but one tablespoon of the fat rendered and add the leeks. If you’re not familiar with leeks, you’ll need just the white and light green parts for this recipe, which you’ll slice into thin half circles. But definitely don’t throw away your leek tops! I like to keep them in the freezer and pull them out to add an oniony flavor when making homemade stocks. Once your leeks are tender, add the kale and a pinch of salt and cook until wilted.

By this time, your potatoes should be just about ready. Drain them of water, add the milk and butter and use a potato masher (or really whatever you can find) to mash everything together. Crumble in the bacon and fold in the leek and kale mixture. Season with salt and pepper and your colcannon is ready to go!

what to serve with colcannon

Colcannon is really a great addition to anything that you would serve with regular mashed potatoes! It’s especially delicious served alongside stews and anything saucy that can be spooned over the top almost like a gravy. And of course it would make an excellent side dish to your corned beef and cabbage!

Since it’s only the two of us, we generally wind up with a lot of leftovers. Luckily, colcannon is one of the easiest foods to repurpose. Its consistency is absolutely perfect for making croquettes and it’s also excellent when used as a topping  for homemade shepherd’s pie!

For more great side dish inspiration, check out these recipes! 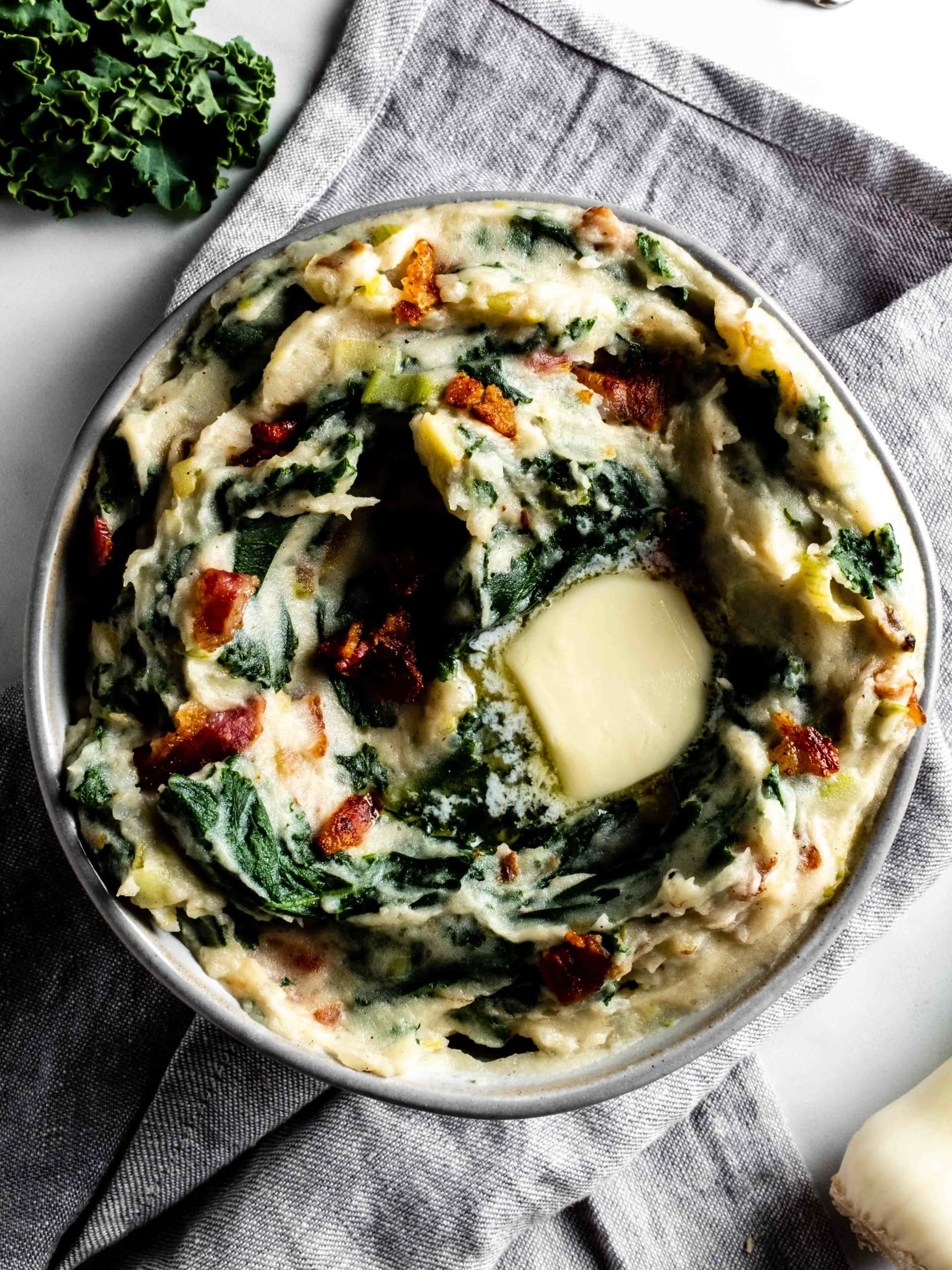