These festive gingerbread cupcakes are perfectly spiced and ready in just 30 minutes! Serve them hot right out of the oven or enjoy them with our dreamy cinnamon cream cheese frosting!

Topped with cinnamon cream cheese frosting and a sprinkling of cinnamon sugar, these gingerbread cupcakes will bring a little warmth to your kitchen and definitely get you in the holiday spirit. And really, is there anything better than the smell of fresh gingerbread wafting through the house on a chilly winter day?

Incredibly soft and fluffy and packed with warming spices, these gingerbread cupcakes are the perfect winter dessert. But they also make a great mid-day snack. And okay, we’ve even been eating them for breakfast! They’re just so addicting!

The best part about these spiced cupcakes is that they can be made in just 30 minutes and you probably already have most of the necessary ingredients in your pantry! The one thing you may not have on hand is molasses, but in a pinch you could substitute it with honey. If you decide to go this route, I would recommend using a bit less honey, as it’s sweeter and generally thinner than molasses. And as for the spices, feel free to mix it up with your favorites. Ginger and cinnamon are a must, but cardamom, a dash of allspice or even ground star anise would also be great additions!

To bake your cupcakes, just distribute the mixture evenly among 12 cupcake liners or use a greased muffin tin. There should be enough cupcake batter to fill each liner approximately ¾ full. Then they’ll need to bake for 18-20 minutes at 350 F (180 C). These cupcakes are quite moist, but when they’re ready an inserted toothpick should come out mostly clean. Then you can enjoy them immediately or let them cool down and add a bit of your favorite frosting!

If talking about the deliciously spiced gingerbread wasn’t enough to put these little treats on your holiday baking list, allow me to introduce you to our cinnamon cream cheese frosting! It’s incredibly easy to whip up and can be made with just five ingredients: butter, cream cheese, vanilla extract, cinnamon and powdered sugar.

To ensure your cinnamon cream cheese frosting is a success, here are a few tips:

Now that you’ve got your cinnamon cream cheese frosting, it’s time to decorate our gingerbread cupcakes! For the cupcakes in the photos, I used a wilton open star tip 1M to create whirls of frosting. While I generally have piping bags on hand, a ziplock bag with the corner cut off would also get the job done. And if you’d rather, definitely feel free to use a knife or spatula to swirl the creamy frosting on top!

And if you’d like to add a few more decorative elements, I’ve got a few ideas for you! For this batch, I sprinkled a bit of cinnamon sugar on top and added little pieces of cinnamon stick to the frosting. Other great options would be to add a dash of plain cinnamon or top off your cupcakes with sprinkles like these festive little gingerbread men!

If you’re looking for more sweet treats to try out this holiday season, definitely take a look at these: 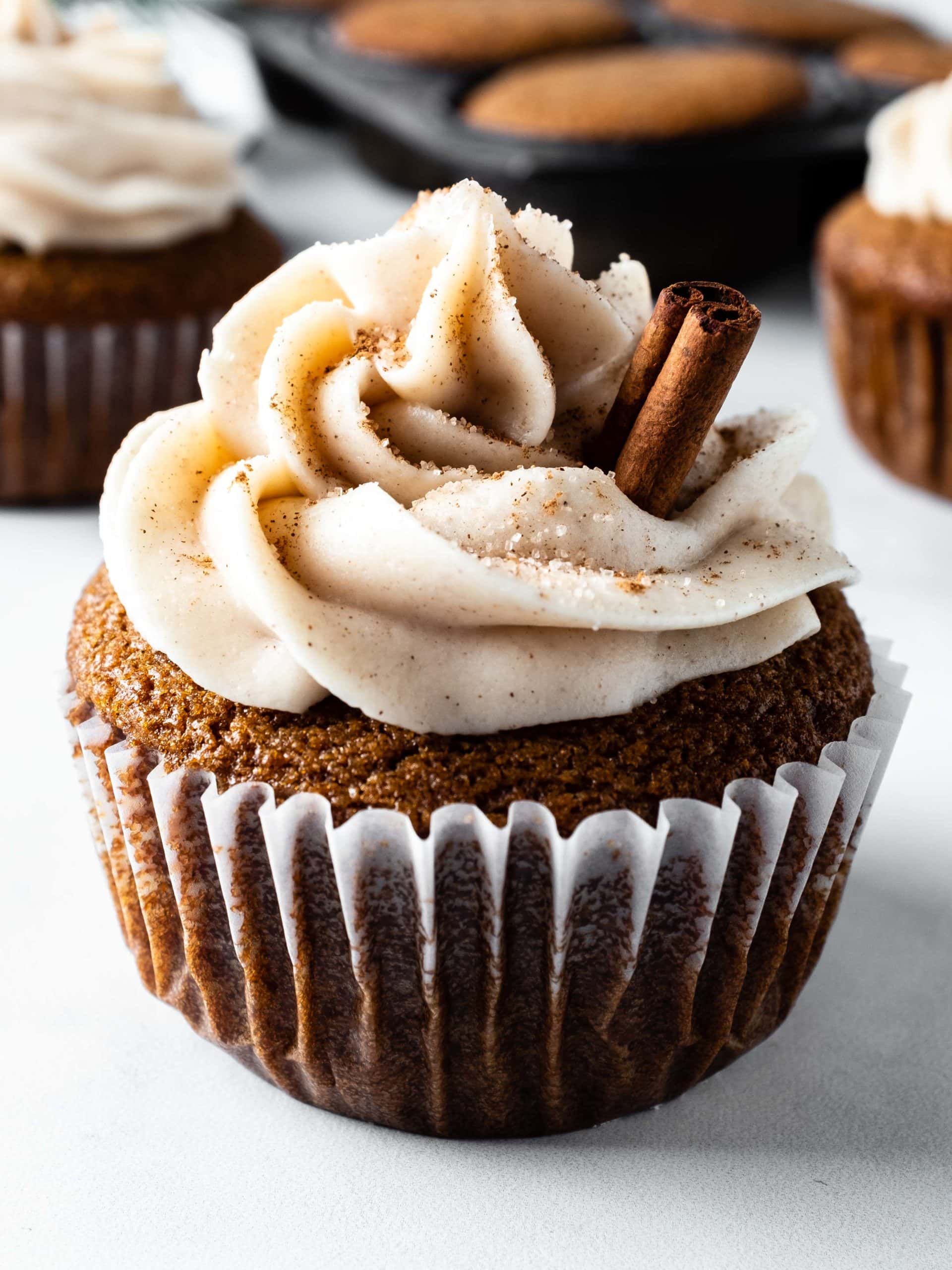