When cooking steak indoors, reverse searing is the ultimate method to produce an irresistibly juicy steak with a perfectly browned crust. Add an extra flavor boost by basting your steaks in rosemary garlic butter!

Steaks are a delicious option for celebrations and date nights, but until recently I’ve mostly avoided them unless the weather allowed for grilling. When using a more expensive cut of meat, you want to be sure you’re cooking it right and I just wasn’t confident in my ability to do the steaks justice when cooking indoors. But in the midst of a long winter and with Valentine’s Day coming up, I decided to try out a technique that I recently learned about: the reverse sear. It’s surprisingly simple yet yields consistent results. The method gives you more control over the process, which results in a more evenly cooked steak and an incredible seared crust!

Reverse searing is a method that works best for thicker cuts of meat such as t-bone or porterhouse steaks. The most common method of cooking such steaks indoors is pan frying, where the steaks are first seared and then finished in the oven. Reverse searing is just the opposite. Start by cooking your steak in the oven and then finish it off by searing it in a hot skillet. The technique itself is not that old, which is perhaps why it is not especially common. I recently heard about it on a cooking show and it immediately clicked: this method makes it so much easier to ensure your steaks are cooked to perfection!

I want my steak to be tender, evenly cooked and have an incredible seared crust. When a steak is pan fried, the outside gets cooked much faster than the center. This produces a gradient doneness, where the center stays pink and is surrounded by a more well-done band of meat. When the steak is reverse seared, you first place it in the oven at a low temperature to gradually increase the temperature and ensure the steak cooks evenly. Then you remove the steak from the oven a little before your desired temperature (check the temperature in the center of the thickest part using an instant read thermometer) and finish cooking it by briefly searing in a hot pan. Regardless of your steak preferences (be it medium-well or rare), this method will yield a more evenly cooked steak.

A well developed crust will take your steak from good to great. One of the main barriers to a good browning is the moisture on the surface of the steak. Thus it is commonly advised to pat the steak dry with paper towels before frying. Because reverse searing dries out the surface of the steak, patting your steaks dry is completely unnecessary and the searing is a lot more effective!

Another key to a good crust is to sear your steaks at a high temperature. I would recommend using a cast iron skillet if you have one (we use this cast iron skillet). Cast iron pans have a high heat capacity which means they better maintain a high temperature during cooking. To begin, use oil with a higher smoking point (such as sunflower or vegetable) and heat the pan to the point where the oil is almost smoking. Sear the steaks for two minutes in total, turning every 30 seconds to make sure they are evenly cooked. And to finish, briefly sear the sides.

I like to add a little extra flavor to my steaks as I cook them and my preferred method is butter basting. Usually butter basting is used when steaks are pan fried — you fry them in a generous quantity of butter and spoon the hot butter over the steaks as they are cooking. One of the components in butter is milk solids, which start to caramelize at high temperatures thus assisting with browning and also adding to the flavor profile.

When using the reverse sear method you want to heat the skillet far past the smoking point of butter. For that reason, I like to melt the butter in a separate saucepan together with crushed garlic and fresh rosemary. Then as I sear the steaks I spoon hot butter from the saucepan on top of the steaks. This allows me to impart more flavor on the steak crust with little to no extra smoke. I also reserve a few spoons of hot butter to pour on top of the steaks as I serve them. This extra step is worth it for me, but it’s entirely optional!

Looking for more date night ideas? Check these out: 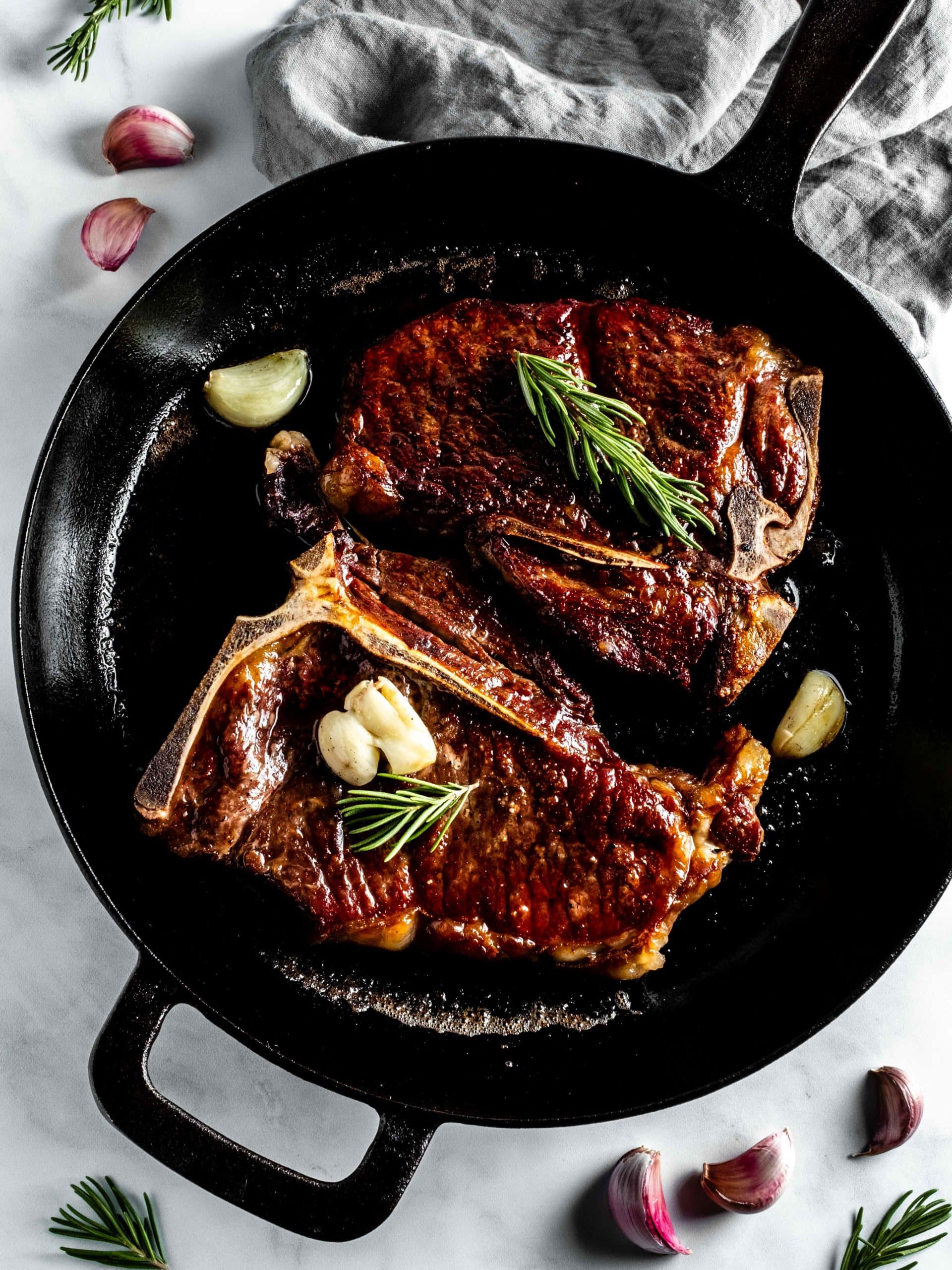 Preparing the steak: for this recipe you don't need to pat the steak dry or bring it up to room temperature before cooking. It can go straight from the fridge to the oven (after briefly seasoning).

Reverse sear and a touch of butter at the end… perfect combination for a great steak. Well done Viktor!

I am so glad you liked it!