Tender, juicy pork tenderloin stuffed with sauteed spinach, dried cranberries and gorgonzola — impressive enough to be your holiday entree, but so quick and easy that it makes for the perfect weeknight dinner! This pork roulade recipe is bursting with flavor and roasted to perfection in under 30 minutes!

There’s something about stuffed pork tenderloin that just seems a little fancy, but it’s actually incredibly easy to make! This perfect combination makes it ideal for holiday meals and dinners when you want to serve your guests something special, but are short on time trying to organize and coordinate a million other little details!

Tenderloin is an extra lean cut of pork not to be confused with pork loin. This long, boneless cut is narrow and usually weighs a bit over a pound (450 g). Because of its smaller size, it’s best suited to cooking quickly at higher temperatures to ensure its characteristic tenderness.

To prepare the meat for the oven, you’ll first need to make a lengthwise cut into the pork tenderloin, but don’t cut all the way through! Then just open your tenderloin like a book, cover with plastic wrap and use a meat mallet to pound to ½ inch (about 12 mm) thickness.

There are so many options when it comes to the fillings for your pork roulade: mushrooms, potatoes, stuffing, apples and nuts! But if you’ve read my apple cranberry chutney with rosemary recipe, you’ll know about my love for anything with cranberries and gorgonzola together — the ultimate sweet and savory flavor combination! For this recipe, I also added sauteed spinach, which resulted in a vibrant and colorful swirl in the middle of the tenderloin that looks so incredibly appetizing!

Before adding the spinach, you’ll saute it with a bit of butter, onion and garlic. If your mixture releases too much liquid, you’ll want to drain it before layering it on the roulade, but a little moisture in there is just fine! As for the gorgonzola, you can definitely switch it out for any other blue cheese or, if you’re not a huge fan, feta would work well too.

After you layer your pork tenderloin with spinach, cranberries and gorgonzola, it’s time to roll it up! Try and leave about an inch (2.5 cm) or a bit more around the edges and then roll it up as tightly as you can. The tighter the roll, the better the swirl! Then just secure the roulade with kitchen twine every inch or so to make sure it doesn’t come undone while cooking.

Before roasting, I like to brush a light layer of olive oil on the outside of the tenderloin and sprinkle it with a bit of salt, pepper, garlic powder, oregano and paprika. This helps to a get a crispier exterior and adds a nice pop of flavor!

At 400F (200C) it usually takes about 25 minutes to reach an internal temperature of 145F (63C), which is how I like my pork tenderloin. At this temperature, the roulade will be tender with just a bit of pink inside, but it should still be juicy and delicious up to about 160F (71C). I recommend using a meat thermometer and checking the temperature at about 20 minutes to make sure you don’t overcook your tenderloin. 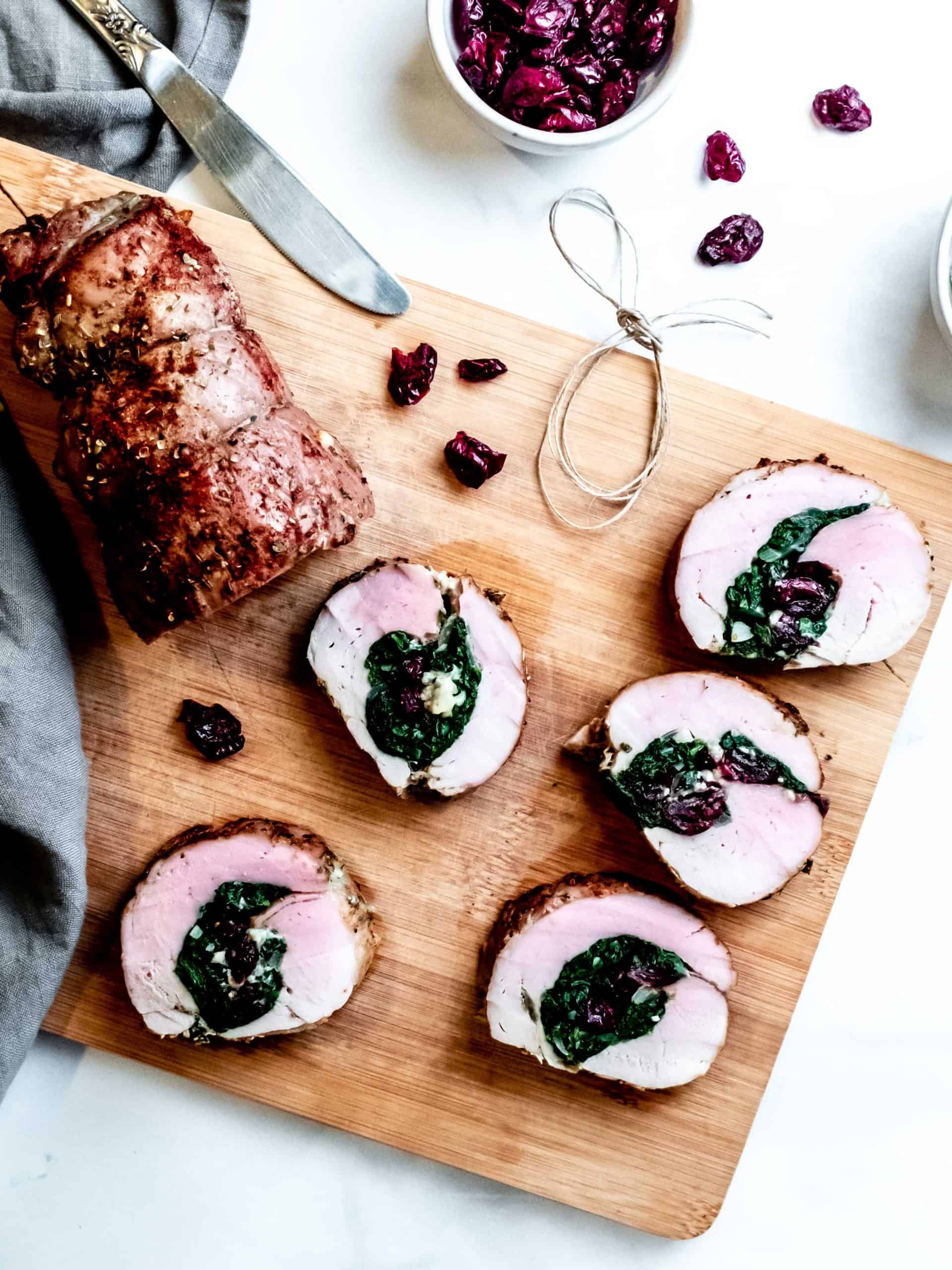 Can you substitute craisins with fresh cranberries? If so, what the ratio from dried to fresh?

Hello! I haven’t tried using fresh cranberries with this recipe, but I think they would work great! I would suggest using about one cup of fresh cranberries. You can cut them into chunks or pulse them quickly in the food processor to get a more even distribution. I hope that helps!