This classic Belizean dish features deliciously tender chicken stewed in a rich and slightly sweet gravy! Serve your stew chicken with a side of rice and beans for a hearty and incredibly comforting meal!

Almost two years ago we spent a week exploring the spectacular jungle and beautiful beaches of Belize. And while a lot of our time there was spent devouring fresh seafood, one of my favorite meals was a delicious plate of stew chicken! The recipe for this comforting Belizean classic varies from household to household (and it seems like everyone has their own special ingredient), but today we’re sharing a simple version that we love to make at home when we want to bring a bit of tropical sunshine to our own kitchen.

Before we get to making the stew chicken, let’s talk about one ingredient you might not be super familiar with: achiote paste (which is also called red recado in Belize). The paste, which is a staple in kitchens across Belize, is made with ground annatto seeds and various other spices such as oregano, cumin and coriander. The bright red annatto seeds come from achiote trees native to tropical Central and South America and are what gives the paste its characteristic color.

To use the slightly peppery and almost earthy achiote paste, we like to first mix it with a bit of liquid (such as water, vinegar or lime juice) to make it easier to work with. Then you can use it as a marinade or even add it to tortilla or empanada dough for a bit of flavor and beautiful color!

You can definitely make your own achiote paste, but we generally buy it either at our local Mexican grocery store or online. We’ve used several brands and our favorite has been El Yucateco.

After briefly marinating your chicken thighs in achiote paste mixed with lime juice, soy sauce, cumin and oregano, it’s time to brown the chicken in a mixture of brown sugar and coconut oil. Heat the coconut oil and brown sugar over medium heat until it forms a nice bubbly syrup. If it’s cooking too fast, reduce the heat to prevent it from burning. Then reserve the marinade (there won’t be too much, but you’ll still want to add it to the stew later) and fry the chicken quickly on each side to get a deliciously caramelized crust.

Next, brown the onions and then add the rest of the ingredients to the pot (garlic, chopped tomatoes, chicken broth, fresh thyme and any reserved marinade). And finally, return the chicken to the pot and let it simmer away for about 40 minutes or until tender! I like to let the chicken cook covered for the first 20 minutes and then I uncover it for the remaining time in order to reduce the sauce a bit.

what to serve with stew chicken

We love our stew chicken with rice and beans to soak up all of that delicious gravy. And if you’re up for it, you could definitely make classic Belizean rice and beans, which are generally cooked in coconut milk and flavored with pig’s tail or bacon.

And if we have any leftover stew chicken, we always make salbutes the next day! Salbutes are small puffed fried tortillas that are super popular in Belize. They’re great served with a bit of stew chicken, tomatoes and maybe some avocado slices or cabbage slaw!

If you love this recipe, you should definitely try some of our other favorite stews from around the world! 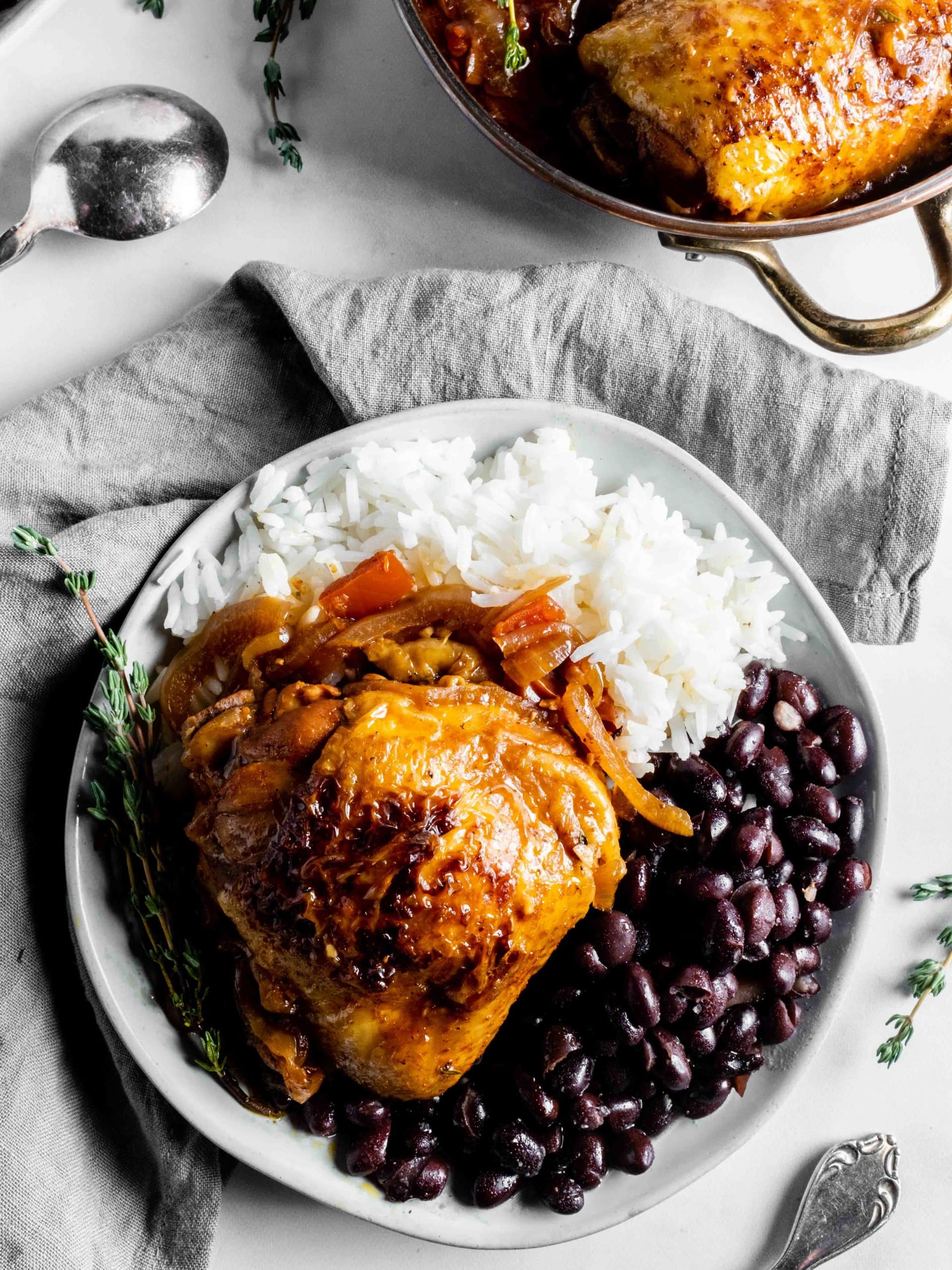 Ok, let me try to find out whether I can buy the achiote paste somewhere… never heard about that ingredient, but maybe I can order it online somewhere. This stew looks too good to pass by without trying to cook it 🙂

Hi Matej! I hope you can find it online – it’s been fun to experiment with!

Interesting and going to fix it! Looks and sound delicious!

Thanks Nina! I hope you love it! 🙂

I’m so excited to try this. Ever since my husband and I went to Belize on our honeymoon I’ve been on the search for a good Belizean stew chicken recipe! I remember it being sweet and so many of the recipes I’ve seen aren’t sweet at all, so I’m excited to try yours! We make the coconut rice and beans frequently, and I’ve been dying to have it with stew chicken and some Marie Sharp’s hot sauce to really recapture that flavor!

I hope you love it, Katie! Coconut rice and beans are sooooo good with this and now you have me craving some Marie Sharp’s hot sauce! 🙂