This simple mushroom barley soup is slightly smoky, incredibly hearty and perfect for a cold winter evening! Serve it with a spoonful of sour cream and fresh dill for a delicious flavor boost!

Pearl barley or perlovka (перловка) in Russian is something that Viktor grew up eating, but the nutritious grain never made it into my family’s cooking repertoire. So when we picked up a large bag of barley at our local market, it took me awhile to decide how I wanted to use it. To start with something simple, I decided to make a batch of soup with ingredients traditionally found in the many Russian barley dishes of Viktor’s childhood: mushrooms, dill and a big spoonful of sour cream!

Most of the flavor in this barley soup comes from the variety of fresh and dried mushrooms. I like to start with a few dried porcini mushrooms to really pack an umami punch. If you’re not familiar with dried mushrooms, they couldn’t be easier to use and you only need about 10 grams (or ¼ cup) to really infuse the mushroom flavor into the broth. To rehydrate your mushrooms, simply soak them in hot water for 30 minutes. And to maximize the use of your dried porcinis, make sure to add the soaking liquid (strained of any sediment) to the soup along with the rehydrated mushrooms!

As for the fresh mushrooms, I used a mixture of shiitake and cremini mushrooms and loved how the dish came out. Chanterelle and oyster mushrooms would also be great additions so feel free to use your favorite varieties! To prepare your mushrooms, thoroughly wash them and slice into bite-sized pieces. Then saute the mushrooms in a tablespoon of butter with a pinch of salt. Here it’s important to cook the mushrooms until their liquid releases and then completely evaporates.

And if you’re looking for more ways to use dried mushrooms, definitely check our recipes for polish hunter’s stew and thai curry soup!

how to make soup with pearl barley

The main thing to remember when making soup with pearl barley is to ensure you’re using enough liquid. This recipe calls for five cups of liquid plus one cup of barley. The barley absorbs almost three cups of that liquid and because the starch content of the barley also helps to thicken the soup, the final dish has an almost stew-like consistency.

If you’d like your barley soup to be a bit more brothy, you have a few options. The easiest option is to just add a few more cups of liquid (broth, water or even mushroom soaking liquid) to the soup. Alternatively, you could cook your barley separately, briefly rinse and then add to the soup. I recommend the first option, as the pearl barley tastes best when it has a chance to absorb the delicious flavors of the soup!

If making your barley in a separate pot, you can just follow package instructions. But to use pearl barley in this soup, we like to let it simmer for 40-50 minutes in the mushroomy broth. The cooked barley should be soft, but still a bit chewy.

Other than onion and garlic, the only other seasoning we add while cooking this soup is smoked paprika. It gives the broth a smoky taste that perfectly complements the deep mushroom flavor. However, once the soup has finished cooking, we do like to add a bit of sour cream for creaminess and a sprinkling of dill to add a bit of freshness to our earthy soup.

And don’t forget to check out some of our other favorite soups and stews! 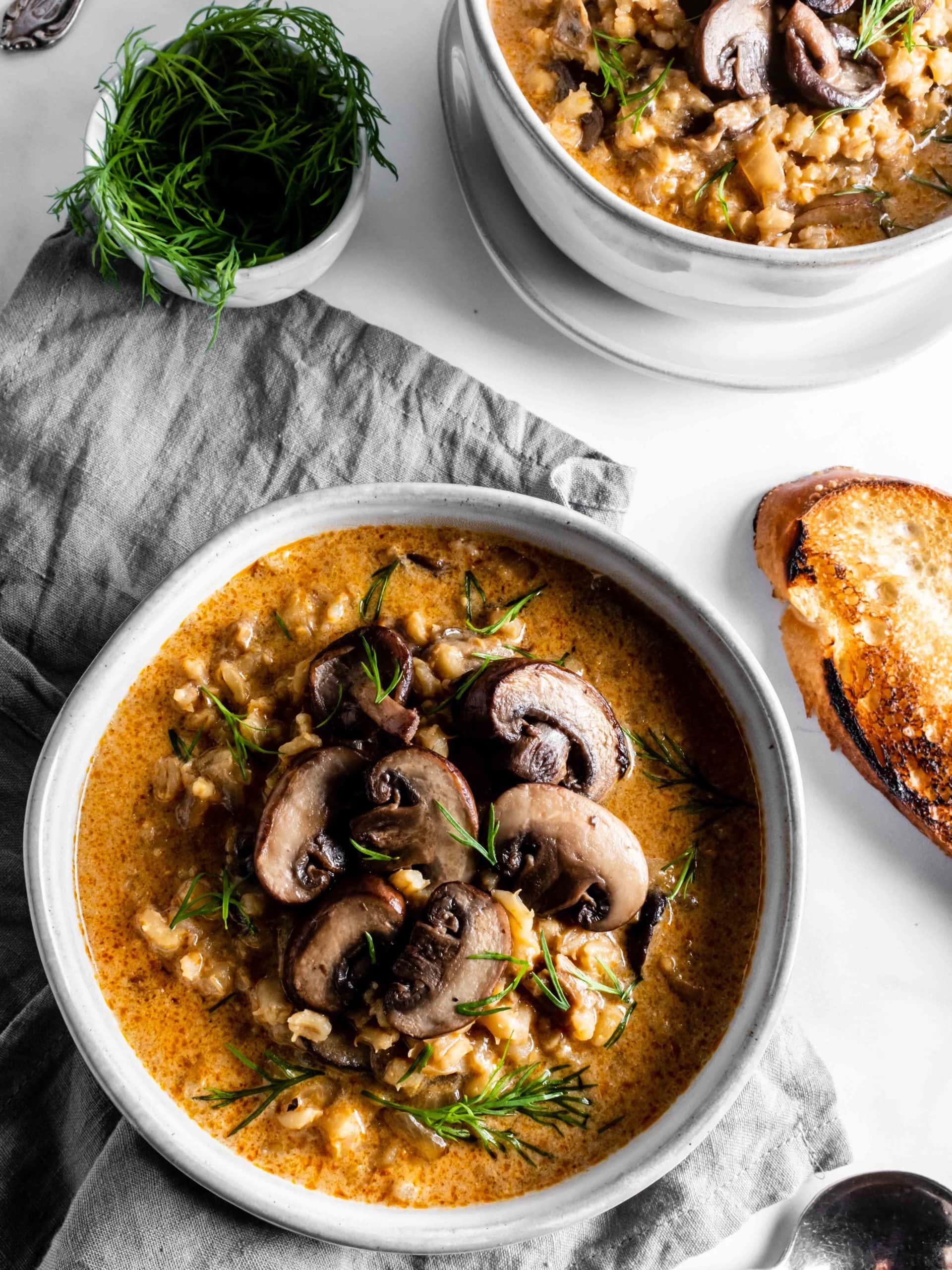